Lovesmiths saved me from a creative crisis when I started it, four years ago, and I have loved having this outlet to write about seaweed and pie and other obsessions. But Lovesmiths has reached a natural stopping point, at least for now. I don't want to yank it off the internet, so I'll just leave it sitting here in case people need a good recipe for Chickpeas and Chorizo, Farro Salad with Basil, Olives, and Marcona Almonds, or Saffron Risotto Cakes, to name a few of my favorites. Warmest thanks to those who have read and cooked along!
xoxo Freda
(I'm on Twitter and Facebook)

What Would Jimmie Rodgers Eat?: Apple Pie with Lard Crust 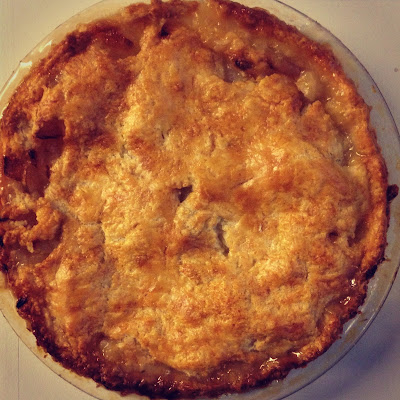 In a recent interview with Nashville's Paul Burch about his new album, Meridian Rising, an imagined autobiography of Jimmie Rodgers, I asked him to extend his imagination to a 1920's dinner on-the-road for the blue yodeler. Burch described a meal that included fresh-killed chickens, greens, rolls, and a pie with a lard crust. I was inspired, and attempted to recreate the meal for my family.

Results were mixed. I'd never attempted to fry chicken before, and as a mostly-vegetarian for most of my life I maybe don't have the skill or equipment to make perfect fried chicken. It was just O.K. I know how to cook greens, though, and my version of rolls (drop biscuits) turned out nice and disappeared quickly. 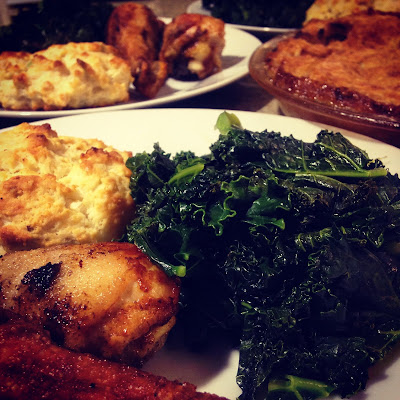 I've baked my fair share of pies, but I'd never tried using lard in the crust (see mostly-vegetarian comment, above) and none of my hippie, vegetarian, macrobiotic cookbooks could help. So I turned to Ree Drummond, "The Pioneer Woman," the blogger/cookbook author/television star with whom I have a complicated love/hate relationship. I'll set aside the hate for now. I knew she'd be able to help with the lard thing and indeed she published this excellent pie-making tutorial a few years ago by baker Pam Regentin. Regentin insists that lard and butter are far superior to manmade fats, and she promises a superior, flakey piecrust using frankly heroic quantities of animal fat. I followed her recipe carefully, including her suggestion to add butter to the filling. Like a lot of butter. 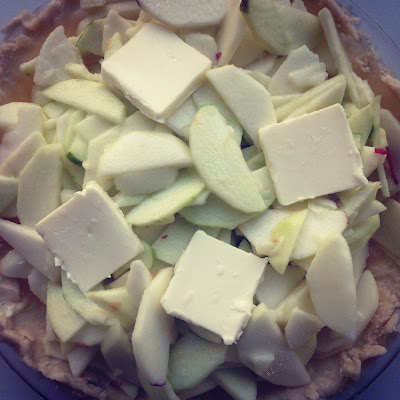 It was the best pie I've ever made. I want to think that Jimmie would have approved. 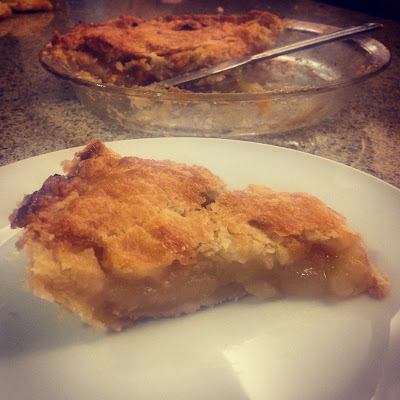 In a medium mixing bowl, combine apple slices, sugar, lemon zest and juice, vanilla, cornstarch, and salt. Set aside to macerate while you prepare crust.

Bake pie at 375 20 minutes, reduce heat to 350, and bake 55 additional minutes, or until filling is thick and bubbling.

Cool for two hours before slicing and serving.
Posted by Freda Love Smith at 4:28 PM 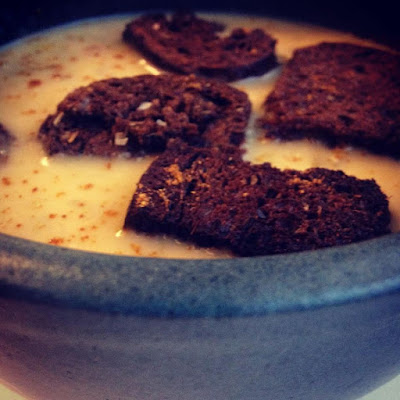 Will Dailey's Beer and Cheese Soup

In a large pot over medium-low heat, melt butter and add carrots, onion, celery and leeks. Add a small pinch of salt, stir well, and cook vegetables 15-20 minutes (do not brown), until onions are sweet and mostly tender. Add garlic and stir for 1-2 minutes.

Add flour gradually, stirring well after each addition to blend well. After flour is fully combined, continue to stir for 1-2 minutes to lightly toast flour.

Add half & half and broth, gradually, stirring well until base is well-blended and creamy. Bring soup to a low simmer and cover. Cook 20 minutes, or until vegetables are very tender.

Add grated cheese and stir well until cheese melts (you can increase the heat slightly if necessary). Cover pot and cook at very low heat for 10 minutes. Turn off heat and let soup sit a few minutes before serving with an optional dusting of cayenne and a mandatory pile of croutons.

"PS" (writes Will) "this tastes twice as good the next day." 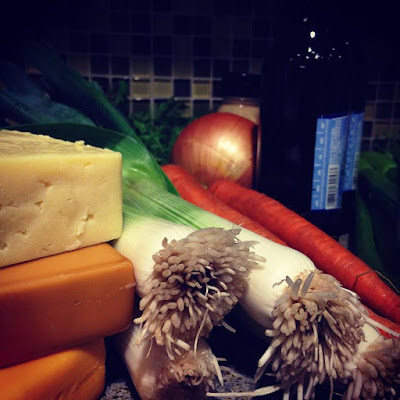 Email ThisBlogThis!Share to TwitterShare to FacebookShare to Pinterest
Labels: Beer and Cheese Soup

We Dish You A Merry Fishmas 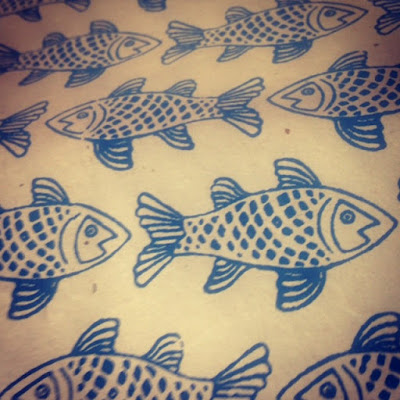 For many years, when my kids were little, our family celebrated four Christmases a year, making the rounds to grandparents and friends, and it was a blast. Now, though, my kids are pretty much grown-up and I'm old and tired, and it feels right to dial it all back. To this end, we stopped doing Christmas at home.

In its place, we celebrate Fishmas.

For Fishmas we eat fish, that's the main thing. We also exchange a few presents, drink whiskey (some of us) and watch movies (or in the case of this year, lots of Groucho Marx videos). It's a new tradition and may evolve further, but so far Fishmas is working just fine.

This year, I made Kedgeree, a smoked fish and rice dish. I followed Delia Smith's recipe, poaching the fish lightly in milk seasoned with black pepper and bay leaf and then using the salty poaching milk to make a rich sauce. It's not health food. But Fishmas comes but once a year. 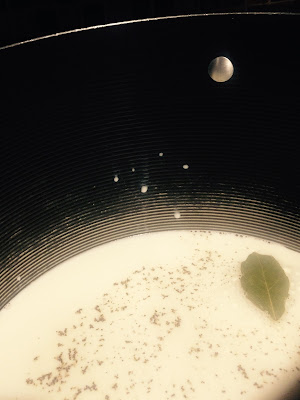 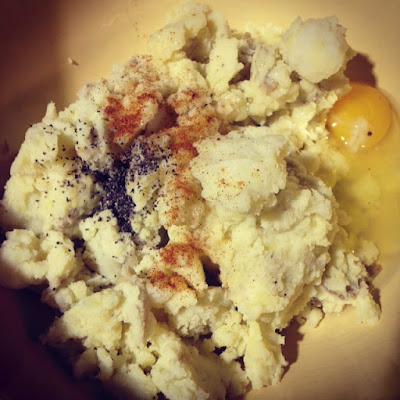 No, not that grim, joyless eschatology I always wind up enduring the last five minutes of while I'm waiting for Bill Maher to start, I mean LEFTOVERS. Thanksgiving dinner turned out pretty great this year, but I didn't want to just eat all the same stuff again on day two. I felt inspired to transform the mountain of tupperware in my fridge into something new. To this end, I found a recipe for Panko Crusted Mashed Potato Cakes on allrecipes:

I followed the recipe closely except I added some cayenne pepper. It was an easy assembly line deal, with multiple dredging steps: flour/egg/bread crumbs. 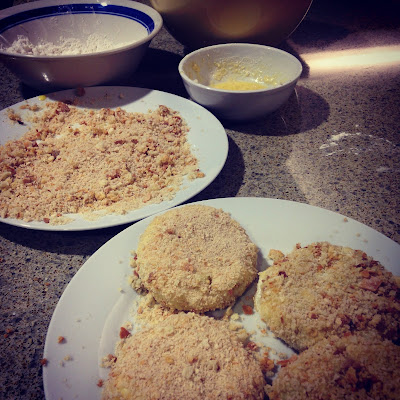 Browned in hot oil, about five minutes on each side. 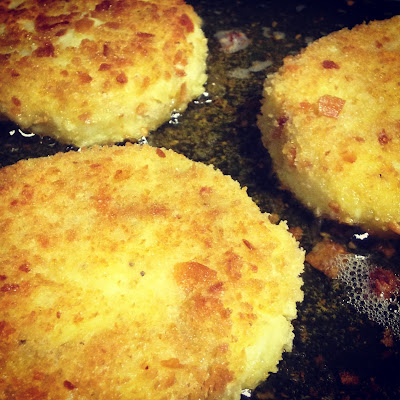 I had a few leftover green beans, a tiny bit of chicken, and some olives, all of which seemed to want to go together. 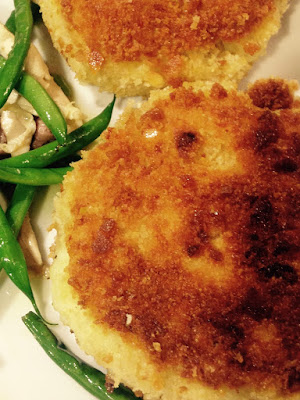 Day one had nothing on day two. 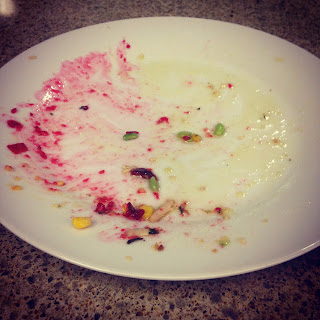 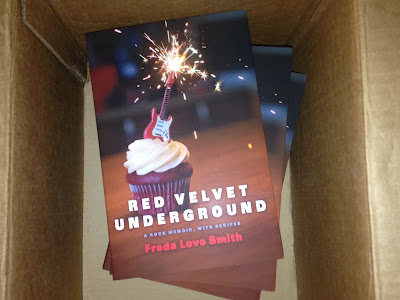 I wrote a book, a memoir/cookbook about teaching my kids how to cook and about being a drummer and a parent. It's for sale now, where books are sold:


I've hosted a few live events to talk about RVU, and I have more coming up, some still in the works and some confirmed:

WORD in Brooklyn, NY on November 13.

Eat Your Words in Toronto on December 5.

The Hideout in Chicago with Robbie Fulks on December 14.

Harvard Bookstore in Cambridge on January 8.

Malaprop's in Asheville, NC on January 15.

Parnassus in Nashville, TN on January 19.

I made granola on television:

And did an interview for one of my favorite podcasts:

It's been good fun to talk about my book and I look forward to continuing the conversation in the months ahead. Let me know if you want a signed copy of Red Velvet Underground, want me to come talk to your book club, or want to throw a cupcake/book party with me in your town! I'm game. 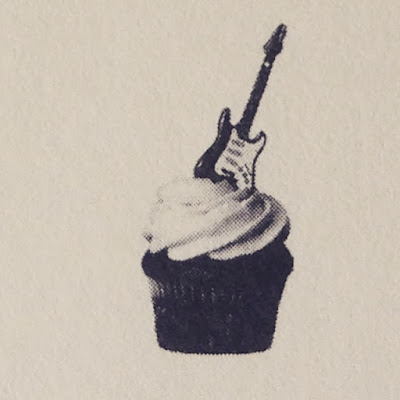 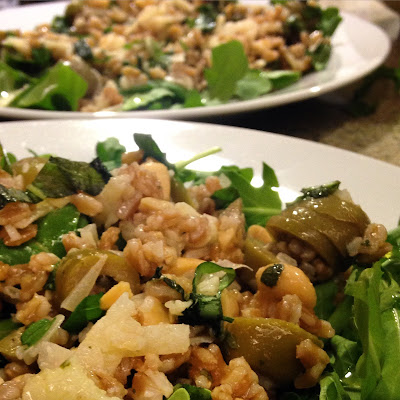 We here at lovesmiths have a bit of a thing for Frank Orrall at the moment. Maybe it's the way Poi Dog Pondering turned all frowns upside down at their concert/dance party in Chicago's Millennium Park this past summer. Maybe it's his thoughtful and charming answers to our recent interview for Paste Food.

Or maybe it's all about the farro.

In our interview, the Poi Dog frontman, Thievery Corporation singer/percussionist, and chef-for-hire mentioned his affinity for farro, an Italian whole grain. He rattled off a few possible ingredients for a farro salad and the recipe below, (which celebrates the fact that we can still get fresh basil at the market), was the insanely delicious result. Try it (maybe while listening to the beautiful new Poi Dog release, Everybody's Got a Star), and you're bound to fully understand this thing.

In a medium pot, bring three cups of water to a boil. Add farro and a small pinch of salt. Reduce heat to medium-low and simmer 20 minutes, or until farro is mostly tender but still has a little bite and chewiness to it. Drain well and set aside to cool.

Distribute arugula evenly between plates and top with farro mixture. Drizzle with a little olive oil and serve. 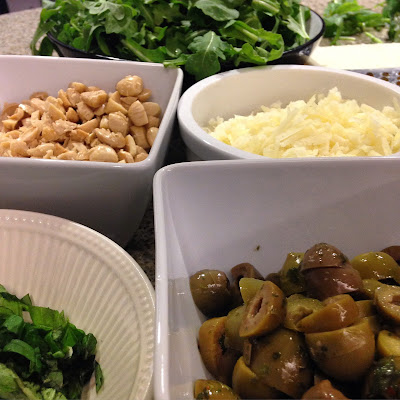