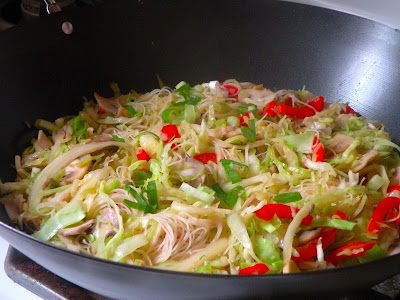 I should have brought the wok out months ago - stir-fry is the perfect technique for a teenage cook; loud, dramatic, fast, and fun, and it's the perfect way for an amateur cooking teacher to sneak in a whole variety of lessons in chopping vegetables, making sauces, and creating balanced flavors and textures.

We are going to be woking for a while; the variations are endless. Here's this week's experiment, a vegan, wheat-free, sweet and spicy delight.

Make sure all vegetables are chopped and close at hand. In a small bowl, whisk together 1/2 cup water, soy sauce, mirin or sherry, brown sugar, and cayenne. Set aside. 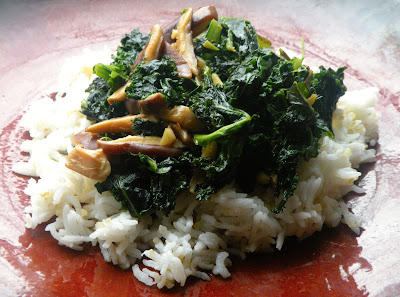 When I was fifteen I started dating a boy whose father loved food and cooked often. Over at his house, I saw things I'd never seen in any kitchen: ginger root, basil plants, black bean sauce, and a large, cast-iron wok. I thought my household was unconventional, with my mother's refusal to stock the fridge with soda and her insistence on brown bread (while everybody else in Indiana ate white bread, I thought), but this was really different. I might have complained about my all-natural peanut butter sandwiches on whole wheat, but my boyfriend complained about his honey and tahini sandwiches on pita, and I had never even heard of tahini.

I was impressed. Especially after I'd had a few meals over there: spicy sesame noodles, eggplant with peppers, and bright stir-fries that brought tears to my eyes.

I was altered for the better by being exposed to a wide variety of kitchens as a kid, from my southern grandmother's grits and gravy, to my suburban friends' jello salads, to my sophisticated boyfriend's ginger root and wok, so this week's cooking lesson, based on the basic stir-fry technique I learned as a teenager, is dedicated to those early outside influences, a reminder about the benefit of foisting your kids on other households as much as possible!

Before you start making the stir-fry, put up a pot of rice or noodles. I like a blend of white basmati rice and quinoa.

Prep everything: wash and chop vegetables and set aside; mince garlic and ginger and set aside separately; whisk together water, soy sauce, sesame oil and cornstarch in a small bowl and set aside. You want everything ready and close at hand - once you begin it's all very fast and furious!

Heat wok over high heat - The wok is ready when a drop of water flung onto its surface evaporates immediately.

Add oil and heat for a few seconds before adding kale, a few big handfuls at a time while you STIR CONSTANTLY. If the kale begins to burn, reduce the heat a bit. Once all the kale is added, stir fry for 2 or 3 more minutes, until kale is almost tender. Add a few spoonfuls of water if it is sticking.

Add mushrooms and stir, stir, stir for 1 or 2 minutes, until mushrooms shrink and start to brown.

Push kale and mushrooms to the side of the wok (the sides are not as hot as the middle, so the cooking will slow down), and add garlic and ginger to the middle. Stir 1 minute, then stir everything together to combine.

Re-whisk the sauce for a second and then pour it down the side of the wok (don't pour it on the middle, it will cool the wok down, and might make your stir-fry turn out soggy, yuck.) and stir constantly for 1-2 minutes until sauce thickens and coats everything.

Eat immediately, on top of rice or noodles. 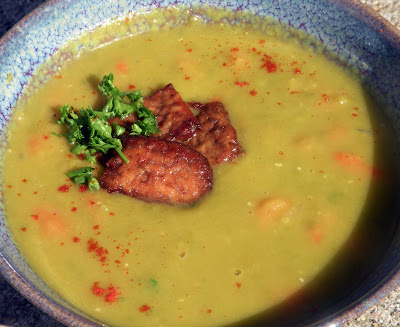 It's official: I am sick of winter. Things that seemed charming back in December have lost their glow. Things like boots. And soup. My body still wants soup while my mind is springing forward to rhubarb, strawberries, arugula.

But we're not there yet, so here is one last soup - tasty and smoky consolation for the still-snowy ground and still-chilly air.

Warm 2 tablespoons olive oil over medium heat in a large soup pot. Add onions (with a small pinch of salt) and cook, stirring, for five minutes.

Add water, split peas, bay leaf, and salt. Bring to a boil, and reduce heat to medium-low. Partially cover, and simmer 1 hour, stirring occasionally (check to make sure peas are not sticking to the bottom of the pot), until peas are very tender.  Add more water if necessary.

While soup is cooking, prepare smoky tempeh topping:
Heat 2 tablespoons olive oil in a skillet and cook tempeh strips, flipping occasionally, until they are very brown and crispy - add a little more oil if you need to. Drain on paper towels and cut into 1-inch pieces.

To finish:
Remove bay leaf, taste soup, and add more salt if necessary. You can blend all or part of the soup for creamier texture.

Top with a few pieces of tempeh and some parsley (and optional paprika). 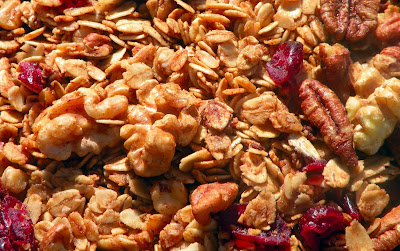 First lentil loaf, now granola - I might have to change the name of this thing to "That 70s Blog." In fact I have an abiding love for all kinds of hippie vegetarian food; it reminds me of my hometown, Bloomington Indiana, in the 1970s: The Tao restaurant, Rudi's Bakery, and the Bloomingfoods Co-op, its bulk bins overflowing with carob and wheat germ.

But honestly, the granola they were feeding us back then contained enough fat to quench a Big Mac Attack and more sugar than a Jell-O Pudding Pop. It was not the health food it pretended to be. These days, you can buy tasty and reasonably healthy granola in the grocery store, but the price! And the main ingredient is OATS, still one of the cheaper items from those good old bulk bins. So I put the kibosh on prepackaged granola, and here are the delicious, econo results. This is an incredibly versatile recipe - use your favorite nuts or seeds, and play around with spices. I always use maple syrup, but I wonder if other liquid sweeteners, like agave, might be tasty too? If you try, please let me know.

Making granola is a nice Sunday afternoon project; easy, low-maintenance, good-smelling, and entirely kid-friendly (let your kid pick his/her favorite seeds/nuts/spices and invent a unique blend), and it's fun to enjoy the fruits of your labor all week. Although if you're aiming for all-week supplies (and if you eat as much as we do), you might double the recipe.

Add oats and nuts and/or seeds and stir constantly for a minute or so to completely coat and lightly toast nuts and seeds.

Transfer mixture to lightly oiled baking dish - either a rimmed cookie sheet, or a 13 x 9 dish - you want to spread the granola out evenly in a reasonably thin layer.

Bake 30-40 minutes, until toasty and brown, stirring every 10 or so minutes. If using dried fruit, stir it in immediately after taking granola out of the oven.

Cool completely (be prepared for grabbing hands), and store whatever's left in a sealed container.
Posted by Freda Love Smith at 8:29 PM