I guess I could say the nest is half empty. A few weeks ago, my oldest son Jonah started college, and it has been discombobulating.

It's kind of terrible. I ran into my neighbor Bob, whose daughter is now in grad school, and we commiserated on the sidewalk. "Nobody," said Bob, "tells you how hard it is. One minute they're sitting at the table eating a bowl of cereal, the next you're driving home from some college with a broken heart." True.

But it's also kind of wonderful. Jonah is ready, he's happy, he's doing the things he should be doing and he's in a good place.

And I'm getting more sleep - no more 1 a.m. awakenings, no more late night clunking sandwich making. It reminds me of that momentous leap of long ago, from having a night-waking toddler to having a kid who sleeps through the night.

I am sleeping through the night. I hope Jonah is. I have no idea, though, and no way of knowing. Maybe he's not sleeping at all. I don't know. He could be doing anything. What was I doing when I was 18?

Did I mention how terrible this is?

I miss many things about my oldest son, but these days I especially miss our irregular Sunday evening cooking lessons. During all of Jonah's senior year, I cobbled together a cooking course of sorts, an attempt to prepare him for adult life and an excuse to spend some time with him while he was still home. It was also, I must admit, a sideways ploy to get someone other than me to make dinner once in a while.

Jonah's cooking lessons were imperfect, but I knew that from his perspective the project was a success when he claimed, shortly before his departure for college: "I now know how to cook. You don't have to worry about that." For me, it was an unquestionably valuable experiment. I only wished I'd started doing it earlier, much earlier, like when he was 13.

Which brings me to Henry. Henry, 13, is my youngest son. For the past year he has been saying things like, "When can I start MY cooking lessons?" Henry has always been impatient, always trying to catch up with his older brother. He stubbornly started to walk when he was 8 months old, before his little round baby body was even ready. I'm convinced, especially in retrospect, that this was an act of will, a major clue about the personality of a very, very determined person.

Well Henry, good news: It's your turn. Time to rattle those pots and pans.

I guess I could say the nest is half full. 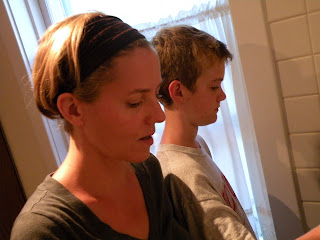 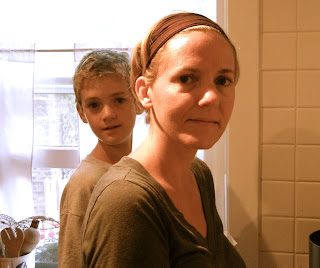